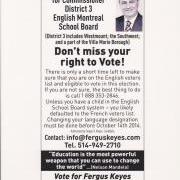 School Board elections are scheduled for November 2nd 2014. In my opinion, these elections are very important to the survival of the English Boards within Quebec.

The nominations for both Commissioners, and the Chairperson, for the English Montreal School Board closed last Sunday. I am pleased that there will be elections in all Districts since there are 2 or more candidates running for each position. This is really good for the democratic process and for the EMSB – it indicates a level of interest in our very important education system. I would like to take a moment to thank each and every candidate who has “thrown their hat into the ring” and wish them a good campaign.

I am running as a School Board Commissioner in District 3, which includes Westmount; The Southwest and a part of the Ville Marie Borough.

However, the fact that I am a Candidate is less important than the idea that the Government is considering merging or even eliminating School Boards. This would be a particular problem for the English speaking community since these Boards are one of the few places in the Quebec political system where English speakers actually have a voice. For example, if your local School was threatened with closure, would people prefer to argue their case with a local representative; or with a bureaucrat in Quebec city?

The only way to be sure that your name appears on the English List is to call 1 888 353-2846 and ask them. Usually it only takes a couple of minutes to find out.

If you are not on the English list but would like to transfer your name from the French list to the English list, there is a simple form to complete, which you can find at

However, it is also important to note that this request to change form must be received at the EMSB office no later than October 14th 2014

So please make sure you are on the English list; and then vote on November 2nd – a strong voter turn-out will indicate that the English speaking community does care about their own School Board.